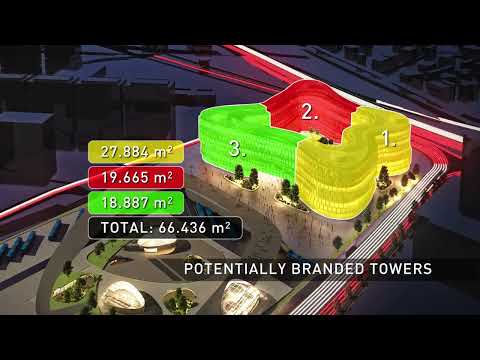 The regeneration of the Kelenföld area is one of Europe’s largest public transport brownfield investments, the scope of which includes the Etele Plaza retail park, transport developments and the creation of the Budapest ONE.

Kelenföld is part of Budapest’s 11th district and is known as the western gate of the city. The Kelenföld train stop Railway Station and the adjacent bus station have several routes serving Western Hungary, while nearby motorways extend to Western and Southern Europe. The terminus of the now-completed Metro 4 line is also located here, making this space Central Europe’s largest and most accessible transport hub.

The new centre of this area will develop in the district over the next few years, as both state and private investment are implemented.

The project’s total area covers 36 hectares, with more than 750 000 m2 of residential, office and retail property development planned in partnership with other developers. There is also the possibility for constructing landmark buildings in line with the new, important role of the location.

A 65 400 m2 office park with a unique facade and structural design located at Őrmező, Budapest’s “western gate”. The area is easily accessible and contains Hungary’s largest multimodal transport intersection. The city centre can be reached via direct links in under ten minutes.

The outstanding service environment of the offices will be further enhanced by the ongoing development of the Kelenföld district. Just a few minutes’ walk from the Budapest ONE is the Etele Plaza. The building itself is also designed with relaxation and downtime in mind and features a spacious interior garden. There are 1 400 underground parking spaces below the offices.

Etele Plaza is currently under construction and will be Hungary’s third largest
(55 000 m2) shopping and entertainment centre. We have designed a building with a unique exterior, three floors and space for 180 business units. According to the design plans, Etele Plaza will feature more well-known brands than any other shopping centre in the capital. As well as fashion stores, the centre will also feature a large supermarket, multiplex cinema and a range of entertainment facilities.

The area is an ideal point for transit traffic due to the Kelenföld Metro 4 stop. Some 236 000 people live in the immediate catchment area, an unusually high number for Budapest due to the large number of apartments in community housing, which make this one of the city’s largest areas in terms of population density.